Set off on an independent full day-trip to Valencia from Madrid by high-speed train and discover this charming city. It is the perfect mix of city life, sun and beach. The day trip includes a 24-hour hop-on, hop-off sightseeing bus tour of Valencia. 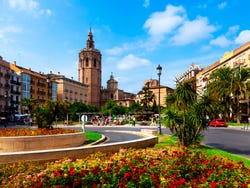 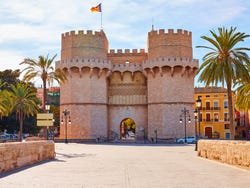 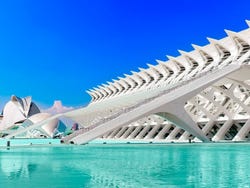 Day Trip to Valencia from Madrid

Depart from Madrid-Puerta de Atocha railway station at 9:40 am on a comfortable high-speed train and relax during one-hour-and-a-half until you get to Valencia-Joaquín Sorolla train station at 11:24 am.

Enjoy a pleasant ride on a sightseeing open top double-decker bus upon arrival and hop off and back on as many times as you want. The Valencia tourist bus tour has two routes: the 90 minute-long “Historical Valencia”, which connects Valencia Railway Station to the old town, in which you'll admire some of the city’s most beautiful historic landmarks and architecture and the “Valencia Maritime” route, where you can see the Mediterranean Sea influence on the city.

Valencia, the third largest city in Spain, has a lively old quarter with emblematic buildings like the Quart and Serranos Towers or the famous Miguelete, the Cathedral’s bell tower dating from the fourteenth century. It is also worthwhile visiting the “Lonja de la Seda”, the most-visited attraction in the city. This Gothic-style civil building was founded during the fourteenth century.

The Valencia Maritime route will take you to the City of Arts and Sciences, an impressive cultural and architectural complex. We recommend visiting the Hemisfèric, the Príncipe Felipe Science Museum, the Palau de les Arts Reina Sofía (Opera House) and the Oceanogràfic.

Take the train back to Madrid at 7:10 pm from Valencia-Joaquín Sorolla railway station. You’ll arrive in the capital at 8:50 pm.

The departure time is indicated on the train tickets, so please be at the railway station at least 30 minutes before, as you must find the right gate and pass the security control.

24 hour Hop On, Hop Off bus ticket to visit Valencia.

Admission to the museums and monuments

You can book up until 24 hours before the activity as long as there are still places. Book now to guarantee your spot.

Not refundable. This activity does not permit modifications nor cancelations.

I travelled with friends
8