As in most other large cities, Madrid’s temperatures vary from the city centre to its outskirts. The temperatures are less extreme in the heart of the capital than in the periphery, where day to day variations are greater.

It rains throughout the year; however, the average precipitation levels are below most other European capital cities like Paris or London. The wettest months are April, May, November and December.

Winters are fairly cold but not as bitter as in northern Spain. Minimum temperatures rarely fall below 32°F (0°C) and snow is not very common. However, in 2009 the winter months were extremely icy and snowy, with the biggest snowfall in decades.

Summers in Spain’s capital are generally dry and hot and are sometimes as blistering as in the south of the country, like in Andalucia. In July and August, the maximum temperatures are usually over 86°F (30°C), although the hottest month of the year in normally August.

The variety of events and monuments mean that Madrid is a great place to visit at any time of the year. In winter, the cold shouldn't be a problem for those accustomed to it, and rain is infrequent.

If you're thinking of visiting Madrid in summer, it's a good idea to visit a museum in the early afternoon, when the heat is at its most oppressive. 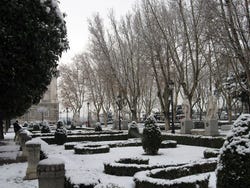