With the passage of time, the metro carriages in the Madrid network were lengthened, and the stations needed to adapt to this new size. Chamberí was impossible to make larger, however, being on a curve, and for this reason it closed its doors to traffic permanently in 1966.

Abandoned for several decades, the station opened its doors again in 2008 as part of the 'Andén 0' (Station 0) project, and since then has dedicated itself to transporting its passengers back in time.

A visit to the past

Passing through the tiled hallways to reach the station, you will find yourself in a surprising space in which it seems time has ceased to pass. Still there for all to see are the old promotional posters, made of ceramic as they were at the time, as well as the ticket machines, furniture and other original features.

Trains on line 1 still pass through the station at high speed as if it was a ghost station, but due to their speed, when passing between Bilbao and Iglesia it remains difficult to notice the station which lies unused. 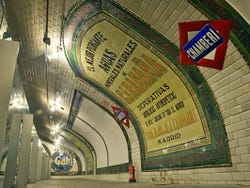 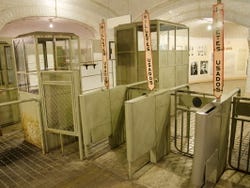 Chamberi Station, a step back in time 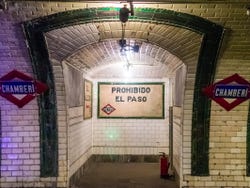