The Park was designed by María Josefa Pimental, Duchess of Osuna, as a tranquil and serene space on her estate at Alameda de Osuna. She wanted to create a space where she could get away from her daily obligations. While it was being created, the duchess would enjoy her walks around the grounds, but unluckily, she died before it was completed.

Walk through the park

The Parque de El Capricho is 14 hectares. The grounds are divided into three spaces, each with a different style. The “jardin à la française” with its refined touch, a space with Italian elements with beautiful fountains and statues and finally, an English romantic style area, which is the largest of the three, full of flowers and plants.

The green-space is packed with highlights worth discovering. Some of the most popular are the Casino de Baile, where large parties are organized. The Templete de Baco is one of the most romantic spaces in the park, surrounded by ionic columns, or the Laberinto, that was destroyed in the 1940s when a plane crashed into the building.

One of the main points of interest is the eighteenth-century palace, restored after the French occupation, and the Casa de la Vieja, a fully furnished farmhouse with life-size dolls that represent the inhabitants.

The best part of the park

One of the best-kept secrets of the park is the bunker built during the Spanish Civil War, a unique enclave that is extremely well preserved next to the palace (transformed into a military headquarter during the war).

If you wish to visit the park, you can also do so by booking a guided tour to learn about its history and be taken to the most special areas. If you like the idea of the guided tour, you should book various months in advance.

Although the Capricho Park is not as popular as El Retiro, it is a genuine pleasure to explore its captivating spaces and enjoy its luxuriant vegetation, especially on the hottest days of the summer. 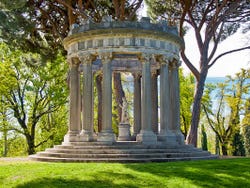 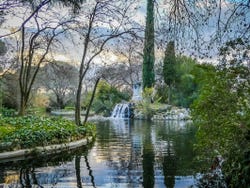 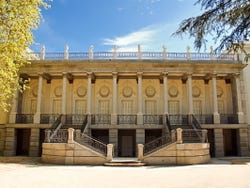