Madrid-Barajas Airport was opened in 1928, although it was officially inaugurated three years later.

With over 57 million passengers in 2018, Barajas has become Europe’s fifth most important airport by number of passengers, after London’s Heathrow, Charles de Gaulle in Paris, Schipol in Amsterdam and lastly, Frankfurt Airport.

Madrid-Barajas has four terminals and a satellite. Terminal 4 was the last terminal to be built and was inaugurated in February 2006 making Barajas one of the largest airports in the world by physical size.

Getting to Madrid from Barajas

The fastest and easiest ways of getting to Madrid from Barajas Airport are the following:

The cheapest way to get from the city centre to any one of the airport’s terminals, and to avoid any traffic jams, is by metro. The journey takes approximately 30 minutes. You'll need a Metro Zone A transport ticket and pay an airport supplement of € 4.50 (US$ 4.90).

The easiest and most relaxing way to get to the city centre is to book an airport transfer service. The chauffeur will be waiting for you at the arrival terminal with a sign with your name on it and will take you straight to your hotel. The service costs just € 28 (US$ 30.40) (cheaper than a taxi) and is the best option if you want to avoid any misunderstandings and language barriers.

Visitors can also take the bus line 203, also called Exprés Aeropuerto, that connects Atocha Railway Station with Madrid-Barajas Airport 24 hours a day, 365 days a year. The bus only stops at Atocha from 6am – 11:30pm. From 11:30pm onwards, the bus stops at Plaza Cibeles instead of Atocha and it takes approximately 30 minutes to get to the Airport. 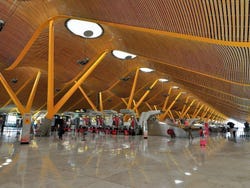 Inside Terminal 4 in Barajas Airport 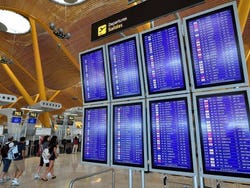 Go to the airport with plenty time
2See photo gallery

How to get to Madrid Atocha Train Station