The square is 129 meters long by 94 meters wide, surrounded by three-story buildings with porches all along the plaza. Historically it's been a meeting place, and used for civil announcements and celebrations. It's filled with commemorative plaques, historic places and other symbols.

Various architects were commissioned to design the Plaza Mayor, but the two most important were Juan de Herrera and Juan Gómez de Mora, who were given the task of designing the first project during the sixteenth century. After a series of fires, Plaza Mayor has been rebuilt several times throughout history. To get there, you can use one of the various gates, each one with a special charm.

During the fifteenth century, Plaza Mayor was called Plaza del Arrabal and then renamed Plaza de la Constitución, Plaza Real and Plaza de la República.  After the end of the Spanish Civil War, the square was given the name of Plaza Mayor, which it still bears today. 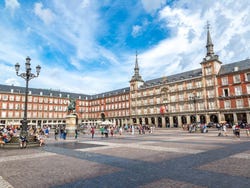 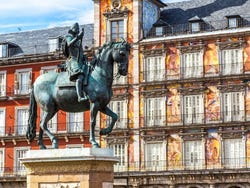 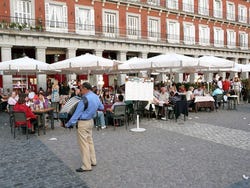 Acordionist on the terraces of Madrid
3See photo gallery

To the west of Puerta del Sol