Visit three of the most beautiful and historic cities in Spain in one day on this day trip to Toledo, Segovia and Ávila from Madrid. 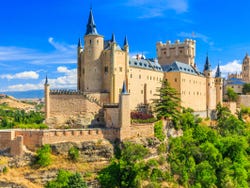 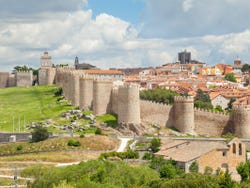 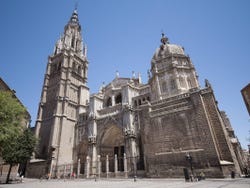 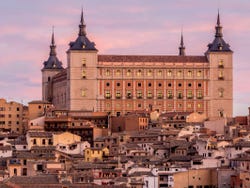 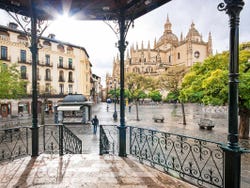 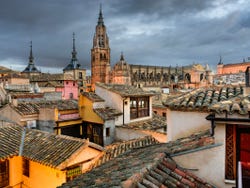 We'll meet in the Plaza de San Miguel square at 7:45 am and set off on our day trip to three incredible Spanish cities that have been declared World Heritage by UNESCO: Toledo, Segovia and Ávila.

First we'll head to Segovia. After just over an hour, we'll reach the region of Castilla y León and enter the historic centre of one of its most special cities. Accompanied by our professional guide, you'll visit places such as the Plaza Mayor, the Cathedral and the Roman Aqueduct of Segovia. Did you know that it was built to supply water to more than 20,000 people? We'll find out all about this impressive construction!

Later, we'll visit the Alcázar de Segovia, a magnificent fortress that has gone through various architectural styles and uses since it was built in the 12th century, such as a royal palace, a state prison and military archive.

Still lost in the charm of Segovia, we'll make our way to Ávila. After barely an hour's journey across stunning Spanish landscapes, the tour arrives at the towering medieval wall of Ávila will welcome us to the city. Stroll a guide through the historic centre and discover its fascinating history, the figure of Santa Teresa and the origin of its wall. We'll get to see it up close and walk along one of its sections - you're sure to be amazed at how well it has been preserved for so long. Then we'll make a stop for a well-deserved meal in a traditional restaurant by the wall.

Afterwards, we'll travel to the Roman necropolis, to the east of the city, where we'll see important remains of this ancient empire. Then we'll leave the region of Castilla y León and head for Castilla-La Mancha. After almost two hours we'll arrive at what is known as "the city of three cultures"; Toledo, our last stop.

We'll visit some of the most outstanding places in Toledo, such as inside the breathtaking Cathedral or the tower of the Iglesia de los Jerónimos church, where we'll enjoy unforgettable panoramic views of the city. And you'll also find out the reason for the city's nickname and the tradition of the three monotheistic religions in its streets.

To top off this day trip to Toledo, Segovia and Ávila, we'll visit a monastery of cloistered nuns and try some typical Toledo marzipan, one of Spain's most famous sweets.

At the end of the trip, the tour takes the hour's journey back to Madrid, where we'll arrive at around 6:30 pm.

This is a bilingual (English/Spanish) guided tour.

Ticket to the Alcázar de Segovia.

Tasting of artisan marzipan in Toledo..

No (not suitable for people with reduced mobility).

Free! Free cancellation up to 24 hours before the activity starts. If you cancel under this time or do not show up, you will not be refunded.
When the minimum number of participants (2) is not reached, we will contact you to offer you other alternatives.

We had a very knowledgeable tour guide and a great group.

Nacho was the best.

I travelled with teenagers
Show all the reviews
-38%

9.3 / 10 242 reviews
Take a free walking tour of Madrid and discover its most emblematic areas, monuments and buildings accompanied by a local bilingual guide and learn about its history and legends.
Free!
Book