Visit La Mancha, the region that saw Don Quixote’s birth, fight the windmills in Mota del Cuervo and find the love of Dulcinea in El Toboso. 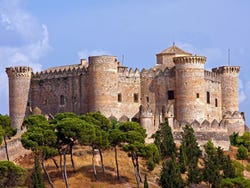 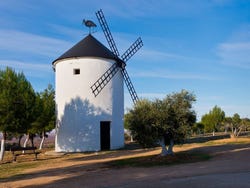 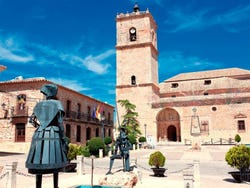 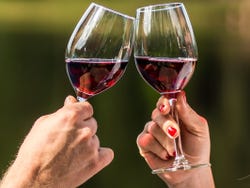 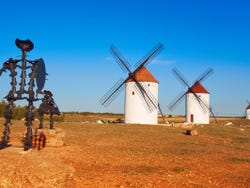 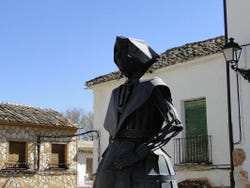 Get on board a comfortable air-conditioned coach at 8:45am in the city center and admire the landscape as you head to La Mancha to follow in the footsteps of probably the most prominent work of literature from the Spanish Golden Age. Explore the Don Quixote route and its most symbolic landmarks.

The first stop will be Belmonte, home to the Belmonte Castle, one of the best-preserved fortress in Spain. It will give you a first glimpse into Don Quixote’s time. Go back in time and find out how the medieval knights lived, heroes of the stories that drove Don Quixote mad. Visit the medieval old town, declared a Historic-Artistic Site.

Next, head to Monreal del Llano, to MontReaga Winery and discover why La Mancha is famous for its great wines. Take a guided tour of the cellars and finish the visit with a wine tasting.

Follow your journey to Mota del Cuervo, a small town located at the foot of a hill. At the hilltop are built seven windmills, witnesses of Don Quixote’s battle against the imaginary “giants”. Stop at a traditional Manchego tavern and have an exquisite three-course lunch with the region’s products and then walk to the windmills and learn how wheat is grinded into flour.

Then, head to El Toboso, where the beautiful Dulcinea lived, unaware of her beauty’s power over the main character. Step inside the Dulcinea de El Toboso House-Museum, a recreation of the 16th century house where Don Esteban and Doña Ana of the famous Zarco de Morales family are said to have lived.

The Casa Museo de Dulcinea del Toboso reflects how the wealthy noblemen lived during Cervantes’ time. The house-museum was built during the sixteenth century and was lived in by a noble family, the Martínez Zarco de Morales. You’ll discover the life of the “sweet Ana”, who inspired the Dulcinea’s character.

After visiting El Toboso, the coach will head back to Madrid. You’ll get to Plaza Oriente, in the city center, at 8pm.

The tour includes an English speaking guide, but the tour can sometimes be carried out in two languages.

Lunch in a traditional Manchego tavern including starter, main course and dessert.

You can book up until the same day (8:00 AM local time) if there are still places available.

US$ 107.60
No hidden fees or surcharges
Free cancellation up to 24 hours before the service starts
Book

Calle San Nicolás, 15 (Next to the Opera House)

Our tour guide was fantastic. There was an issue with the bus getting stuck in traffic, which got us off to a late start. Perhaps it was a result of this, but the day felt rushed. I would've like to have had more time to explore the other windmills and take more pictures.

Our guide was sensational. We just LOVED her

I travelled with friends
Show all the reviews
like -38%

9.30 / 10 270 reviews
Take a free walking tour of Madrid and discover its most emblematic areas, monuments and buildings accompanied by a local bilingual guide and learn about its history and legends.
Free!
Book
like

9.10 / 10 185 reviews
Delve into Spain’s culture and history with a guided tour of the Royal Palace, one of the largest in Europe, followed by the Prado Museum, Spain's most visited.
US$ 53.20
Book