Explore Salamanca, Spain’s most famous Renaissance city and then head to Ávila, surrounded by a perfectly well-preserved city wall during a full-day guided trip from Madrid. 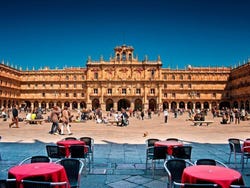 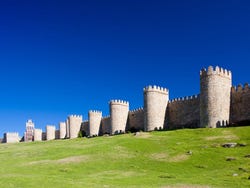 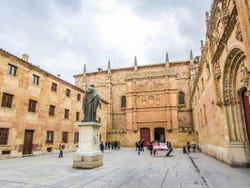 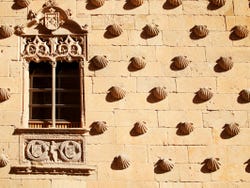 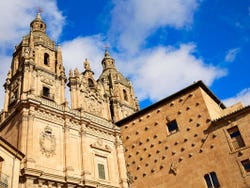 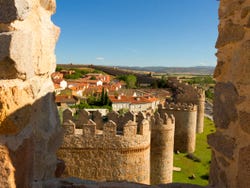 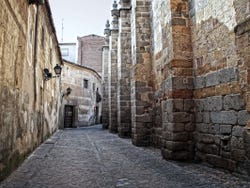 Greet your English-speaking guide in front of Las Ventas metro station at 7:45 am and board a comfortable coach that will head off to Ávila and Salamanca, both listed as UNESCO World Heritage Sites.

The first stop will be Salamanca, Spain’s most popular Renaissance city. You will wander through its main cobbled-stone roads until you get to the Plaza Mayor, one of the most impressive squares in Europe.

Then, you’ll continue to Plaza de Anaya, where you’ll admire the city’s two cathedrals: the New Cathedral of Salamanca and the Old Cathedral of Salamanca. You’ll also visit the city’s epicenter, where the University of Salamanca, the country’s first founded university, is located. Every year thousands of students from every nationality flock to study in this prestigious university. Don’t forget to look for the famous frog that is hidden in the building's façade.

You will have approximately one hour to eat at your own leisure. Your guide will recommend the best restaurants to try typical Spanish cuisine.

With a full belly, you'll hit the road to Avila, famous for its medieval city walls. During your tour of the town, you’ll marvel at the Ávila Cathedral, a spectacular fortified twelfth century church. You’ll also visit San Vicente Basilica, a beautiful Spanish Romanesque styled building and the 2,500 metres of medieval walls.

After visiting Ávila, you’ll be back in Madrid at around 7 pm.

You can book up until 7 hours before the activity as long as there are still places. Book now to guarantee your spot.

US$ 93.50
No hidden fees or surcharges
Free cancellation up to 24 hours before the service starts
Book

Belen was a lovely tour guide. I enjoyed the trip very much! Translate this opinion into English.

Belen was a lovely tour guide. I enjoyed the trip very much! Opinion translated. Show original.

A wonderful tour, the pretty guide (sorry, I forgot her name) explained all the details very clearly, we learned a lot about salamanca and avila, beautiful scenery in these two places, whole route was very stable and comfortable, we're very pleased with the guide and driver, highly recommend this tour! Translate this opinion into English.

A wonderful tour, the pretty guide (sorry, I forgot her name) explained all the details very clearly, we learned a lot about salamanca and avila, beautiful scenery in these two places, whole route was very stable and comfortable, we're very pleased with the guide and driver, highly recommend this tour! Opinion translated. Show original.

I actually switched to Saturday to give myself a break in between tours. All of my tours were amazing! The bus drivers were excellent and the tour guides were very professional, friendly, organized, thoughtful and really know their cities well. I highly recommend your company!

Very interesting day showing the unify and the fifference between the two citties by Stefi.

I travelled by myself
Show all the reviews
like Free

9.70 / 10 73 reviews
Visit three of the most beautiful and historic cities in Spain in one day on this day trip to Toledo, Segovia and Ávila from Madrid.
US$ 148
Book