Inaugurated in 1947 as the 'Nuevo Estadio Chamartin' (New Chamartin Stadium), its current name was chosen in honour of Santiago Bernabéu, president of the team for 35 years.

The stadium has a capacity of 80,000, making it one of the stadiums with the largest capacity in all Spain. The most fortunate spectators also have the possibility of watching a game from one of the 245 VIP boxes which line the stadium.

The Santiago Bernabéu is a place which inspires passion and excitement in its visitors; as the majority are fans of Real Madrid, walking onto the field of play, or passing through the changing rooms just like their idols before each game is a dream come true.

For those with less interest in football, this is perhaps not the best option, but in Madrid, they will have no trouble in finding other kinds of activities and tours best aligned with their interests.

If you want to get to know every corner of the stadium, it's possible to take a tour which allows you to visit the presidential box, the bench, the changing rooms or even walk on to the field of play.

Having toured through the stadium, you can take a look at the trophies and other historical objects the club has accumulated over a long history: shirts, balls and photographs, as well as an interactive section which teaches about the history of the legendary team and allows you to re-live it's most exciting moments.

You can reserve a tour of the stadium online, to avoid the lines.

To maintain its status as one of the premier stadiums worldwide, important reforms to the structure will take place beginning in 2018. It is estimated that these reforms will be finished in 2021.

The most important aspects of the reform include a retractable, wrap-around roof giving the new stadium a futuristic style. The changes come with the construction of a luxury hotel, as well as the redevelopment of the public space which surrounds the stadium. 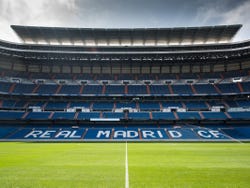 Pitch at the Bernabeau 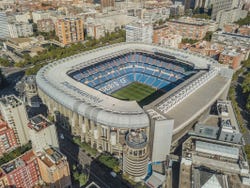 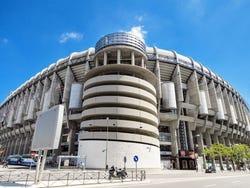 From Monday to Saturday between 10 am and 7 pm.
Sundays and public holidays between 10:30 am 6:30 pm.
This schedule is subject to change on game days. 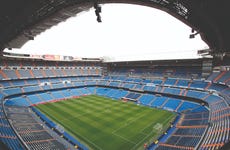