Enjoy a memorable Flamenco show at one of the world’s most famous tablaos and live a magical evening as various celebrities once did including George Bush, Richard Gere and Pablo Picasso. 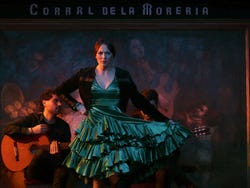 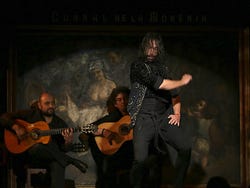 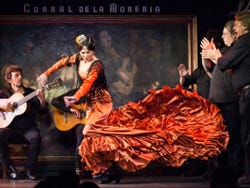 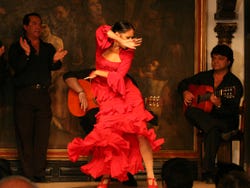 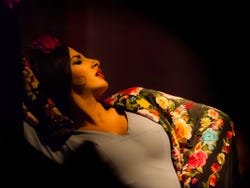 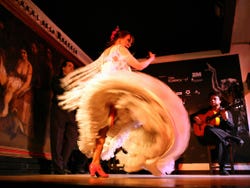 The Corral de la Morería was awarded as the best “tablao” in the world by the “Festival Internacional del Cante de las Minas”, a Spanish Flamenco competition and selected as one of the world’s most iconic places by the New York Times in “1000 Places to See Before You Die”.

The Corral de la Morería was established in 1956. The finest Flamenco artists have all performed here, including Isabel Pantoja, La Chunga, Antonio Gades, Pastora Imperio or Blanca del Rey. Blanca del Rey, who won the National Flamenco Award, is now the Art Director of the Morería.

Nine artists participate in each 70-minute show. There are always two male dancers, one female dancer, a female singer, three male singers and two guitar players. Once you have spent an evening admiring a passionate Flamenco show in the Corral you’ll understand why it is considered one of the best tablaos in Spain.

Dinner at the Corral

You can complete the experience by having a traditional Spanish meal at the Corral de la Morería before and during the show. The chef is at the same level as the performers.

The menu includes a starter (stuffed roast tomato with baby cuttlefish and risotto squid ink, idiazabal cheese or a type of pizza base with green and red peppers, onion and aubergine and goat’s cheese).  Followed by salmon with citrus and vegetables or chicken with Parmentier and Porto sauce. The dessert will be a five chocolate cake and this will come accompanied by wine (red D.O Rioja or white D.O. Rueda) and mineral water.

If you would like another menu or ask for an individual dish, you can ask for something else at the restaurant. Keep in mind that the price is the minimum per diner.

When making your reservation you should choose between different schedules. There are two sittings.

Children under 4 are not allowed to attend a show at the Corral.

A 70 minute Flamenco show (one of the best in the world) with one beverage.

We will send you a voucher that you can show on your phone to take part in the activity.

from
US$ 58.90
No hidden fees or surcharges
Free cancellation up to 48 hours before the service starts
Book

Free! Free cancellation up to 48 hours before the activity starts. If you cancel under this time or do not show up, you will not be refunded.

Calle Morería 17, next to the Royal Palace

Jose G. Is the best waiter. And the food was great! The show was impressive

The show was very entertaining. The dinner was excellent! I would highly recommend both.

It is a show that you cannot miss if you come to Madrid, the show is very good and the Menu is super delicious Opinion translated. Show original.

The menu moreria was quite good, the dance show very good, the singing is not the flamenco singing that I thought I would find. Opinion translated. Show original.

I travelled with my partner
Show all the reviews
like -25%

8.60 / 10 94 reviews
El Retiro in Madrid is home to botanical, architectural and artistic delights. Discover them on this guided tour of one of Spain's most famous parks.
US$ 14.20 US$ 10.60
Book
like

8 / 10 2 reviews
Ghosts from ages past pass through the capital when night falls: get to know their legends with this nighttime ghost tour of Madrid.
US$ 9.40
Book
like Free

9.30 / 10 273 reviews
Take a free walking tour of Madrid and discover its most emblematic areas, monuments and buildings accompanied by a local bilingual guide and learn about its history and legends.
Free!
Book